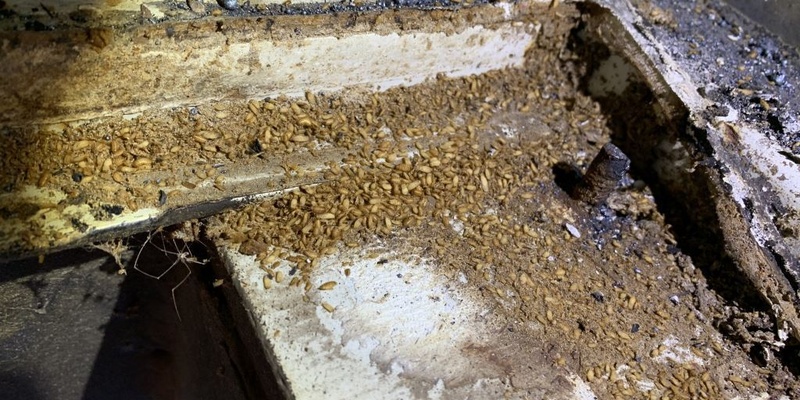 Khapra larvae and skin castings under the floorboard of a container

Rome, 30 December 2020– Khapra beetle, Trogoderma granarium poses an ongoing threat to agricultural industries, even in countries with strong biosecurity systems. The threat is even greater when all it could take to introduce one of the world’s most serious pests to stored grain, is a sea container.

Recently, several countries, including Australia, have observed large populations of khapra beetle surviving in sea containers. Preliminary tracing conducted by authorities indicates that contamination of containers occurred some years before detection as a result of carrying infested plant products from a khapra beetle country.

Khapra beetle can survive as a hitchhiker or contaminant pest in shipping containers for several years, up to 6 years according to some scientific literature. Due to its small size, its ability to survive for extended periods without food and its preference for inhabiting crevices, Khapra beetles and their larvae can remain undetected under floors and in cracks and crevices in shipping containers. The presence of grain remnants and other residues within containers can provide a food source for khapra beetle, resulting in reactivation and emergence from diapause. When conditions are favourable, beetle populations can quickly increase and can contaminate goods, including “non host” goods held within the container.

Many contaminated containers are likely to continue to circulate in trade with the pest remaining undetected. By the time the contamination is recognised, infested goods have often been unpacked, entered the retail chain and may already be in houses. Premises that store or handle the container and contaminated goods may also become infested. Additionally, the contaminated container may be have already been repacked and moved domestically or offshore. Contamination of exported goods has the potential to impede market access and bring into question the khapra beetle status of the exporting country.

A spokesperson for the Australian Department for the Agriculture, Water and Environment said “With an estimated 200 million sea container trips per annum globally, the risk of khapra spreading through container movements is real and is increasing. The challenge facing the world is identifying which containers held contaminated products from khapra countries over the last few years. An immediate and concerted action by National Plant Protection Organizations (NPPOs) and global industry is vital to address this emerging risk with sea containers.”

As a first step, Australia, will be introducing emergency measures to address the risk of khapra beetle in early 2021 (G/SPS/N/AUS/502/Add.3), but the complexity of the problem and its global nature will rely on a coordinated global effort between NPPOs and industry to resolve it in the longer term, particularly in relation to identifying already contaminated containers. This reinforces the need to address contaminating pests moving with and in trade that was raised in the draft CPM recommendation in 2019. If you would like to share any solutions which may assist in addressing this challenging issue, then please contact the IPPC Sea Container Taskforce Secretariat, Artur Shamilov, at [email protected]