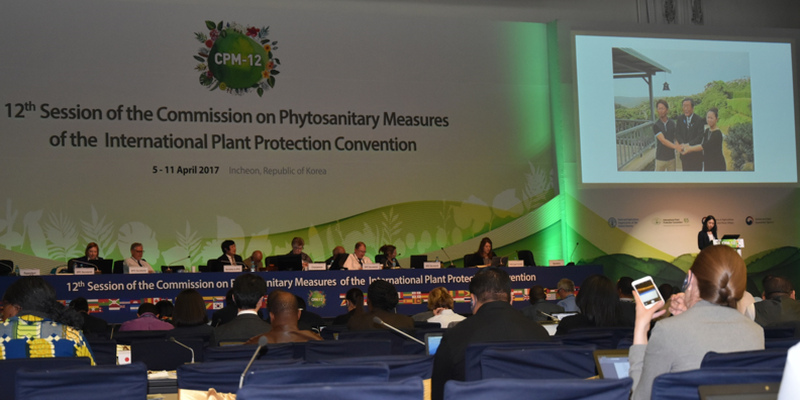 For the first time, Contracting Parties to the IPPC were invited to share their successes and challenges in implementing the IPPC and ISPMs at CPM-12 held from 5-11 April 2017, in Incheon, Republic of Korea. China, COSAVE, the European Union, Japan and New Zealand made their presentations that were well received. The presentations covered areas as diverse as Next Generation Sequencing technologies, and the eradication of the Bactrocera dorsalis species complex.

The People s Republic of China presented their experiences with regard to the implementation of several nationwide activities to promote ISPMs including the establishment of an expert working group for ISPMs, active review and study of ISPMs by way of expert meetings as well as comparative and in-depth topical studies related to ISPMs. ISPMs have also been actively promoted through work manuals, online and in plant health literature. The conversion of ISPMs into Chinese laws and regulations continues to enhance the legal effect of international standards in China. In addition China continues to actively implement and encourage training and publicity aimed at inspection and quarantine officials as well as import and export enterprises worldwide.

COSAVE presented its experience so far implementing the STDF project Strengthening the Implementation of Phytosanitary Measures and Market Access which continues to work towards building up a regional phytosanitary information system, enhancing capacities for conducting pest risk analysis, as well as inspections and phytosanitary certification, and creating tools to improve capacities to assess impacts of the implementation of phytosanitary measures. The project ultimately strives to develop resources and best practices replicable in other countries outside the region to support IPPC implementation and build greater capacities.

Japan presented its history with the Bactrocera dorsalis species complex and the planning and implementation of controls towards its eradication. The presentation noted the extent to which ISPMs served as a guideline and basis of discussion by Japanese domestic experts in the planning and implementing of controls for the eradication of Bactrocera dorsalis species complex in Amami Oshima Island. The ISPMs also contributed towards providing a scientific basis for dispelling areas of concern on behalf of producers. The presenter noted MAFF s strong support of activities supporting the development and implementation of IPPC and ISPMs.

New Zealand presented a successful example of how the New Zealand Ministry for Primary Industries (MPI) tackled repeated importation of sea containers contaminated with regulated pests, and supported the development of a Sea Container International Standard for Phytosanitary Measures. The development of a Sea Container Hygiene System in cooperation with Sea Container importers (shipping companies), their Pacific Island-based service providers and with Pacific Island NPPOs was described as were its operating procedures in collaboration with MPI. SCHS s and the MPI s success is reflected in the 99% reduction in contaminants and pests since 2006. Other successes described include less time required for container inspection and verification; major cost reductions linked to reduce regulatory requirements and reported savings by shipping companies.