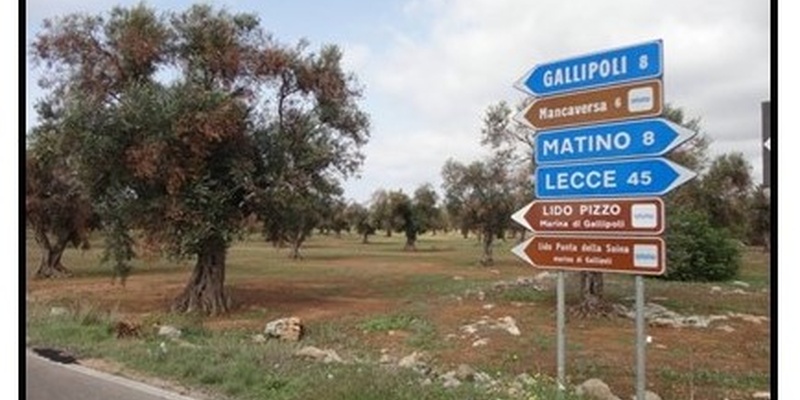 The IPPC Secretariat is happy to announce that five new diagnostic protocols (DPs) have been adopted by the Standards Committee (SC) on behalf of the Commission on Phytosanitary Measures (CPM) as the DP Notification Period just closed on 15 August 2018. The five adopted DPs are:

The newly adopted DPs will help countries prevent the entry or establishment of pests from some important commodities traded globally, particularly those affecting various tree species such as pine, olive and fruit trees (e.g. plum, apricot, apple and citrus).

28 diagnostic protocols (DPs) are now in the suite of adopted annexes to ISPM 27 (Diagnostic protocols for regulated pests) providing specific guidance for how to diagnose a wide range of pests - insects, nematodes, weeds, bacteria, fungi and viruses. DPs are developed by drafting groups that consist of diagnostic experts, reviewed by the Technical Panel on Diagnostic Protocols (TPDP) - a group of international experts nominated by the Standards Committee (SC), submitted to international consultations and reviewed by the SC. This complex and long process ensures that the adopted DPs reflect international best practices and that the guidance they provide is applicable to phytosanitary systems globally. Good diagnostics rely on a number of factors including the availability of human and financial resources, but having support from internationally accepted protocols is also crucial, especially for those countries that do not have the resources to develop protocols of their own.

As outlined in the CPM Recommendation 7, accurate and rapid pest diagnosis underpins phytosanitary certification, import inspections and the application of appropriate phytosanitary treatments.

Xylella fastidiosa (Pierce s disease) is a xylem-limited bacterium with a large host range and several subspecies cause many economoically important plant diseases of agronomic and horticultural crops such as Vitis vinifera (grapevine), Prunus domestica (plum), Prunus dulcis (almond), Citrus sinensis (orange), Olea europaea (olive), Ulmus spp. (elm), Coffea spp. (coffee) and Quercus spp. (oak). The bacterium is inoculated into the water-transporting xylem elements of its host plants by xylem sap-feeding insects such as sharpshooters or spittlebugs. The colonization of the xylem blocks the transport of mineral nutrients and water in the infected plants and leads to symptoms such as leaf scorch, defoliation and death of the host plant. The pest has been in the news lately as it causes the Olive Quick Decline Syndrome (OQDS), a disease which causes withering and desiccation (extreme dryness) of terminal shoots, which then expand to the rest of the canopy, causing the olive tree to collapse and die.

Until recently, X. fastidiosa was mainly distributed throughout the Americas, but it is expanding its geographical range, with outbreaks reported in Asia and Europe. The movement of infected plants and planting material (e.g. budwood and seedlings) is assumed to be responsible for the long distance spread of the disease and its entry into new areas.

This new DP includes protocols for the detection and identification of X. fastidiosa using culturing and pathogenicity tests as well as serological and molecular methods and will be invaluable for the accurate diagnosis of this damaging pathogen. This DP will definitely help the fight against the olive disease, Olive Quick Decline Syndrome (OQDS), caused by this pest which has become a big threat to Italy and Mediterranean countries with olive production.

Austropuccinia psidii (myrtle rust) is a rust pathogen considered to be a threat to plants of the family Myrtaceae (which includes myrtle, eucalyptus, clove, guava and others) worldwide. The fungus infects young actively growing tissues of the host plants, causing branch death and dieback, a significant reduction of canopy density, and tree death.

Since the rust spread out of its native region (South and Central America and possibly the Caribbean) its host range has expanded rapidly to more than 300 species from 73 genera in the family Myrtacea.

A. psidii is an obligate biotroph, meaning it requires a host plant to proliferate. For infection to occur, urediniospores must encounter a host plant during stages of active growth. Although urediniospores of A. psidii can be dispersed over long distances by wind, far reaching dispersal into new geographical regions is believed to result from human activities. Therefore, it is important that the pathogen is accurately identified by the NPPOs and this diagnostic protocol will aid them with detection and identification by providing morphological and molecular methods. 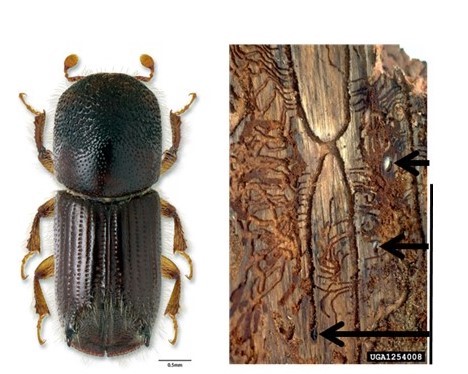 Ips species, commonly known as bark beetles, are sub-cortical phloem feeders in Pinaceae (conifer trees), especially Pinus (pine), Picea (spruce) and Larix (larch or tamarack) species. Ips beetles mainly inhabit weak or dead trees, but during outbreaks adults and larvae can kill thousands of hectares of healthy trees by destroying the phloem and cambium in tree trunks and limbs when feeding and tunnelling. These effects may be exacerbated by pathogenic fungi transmitted by Ips species and certain climatic conditions.

Thus, it is important to be able to reliably identify Ips species that are regulated pests and differentiate them from non-target species. This DP provides methods to identify target Ips species based on morphological characteristics. 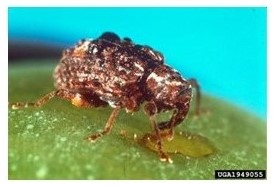 The weevil Conotrachelus nenuphar is a native pest of fruits in eastern North America, especially on orchard fruit such as Prunus spp. (apricots, plums, peaches, nectarines and cherries), Malus pumila (apples), Pyrus communis (pears) and Vaccinium corymbosum (blueberries). The adult weevils feed on the fruit, females lay eggs and the larvae develop within the fruit of these plants, causing considerable damage. All forms of fruit damage are problems for fresh market fruits, and premature drop prevents the fruit from being used as a processed food item.

There are two phenological strains of C. nenuphar in its native range, differing in the number of generations they can develop per year. Of the Conotrachelus species found in the United States of America and Canada, 46 species are broadly sympatric with C. nenuphar, but only three are known to use commercial stone fruit trees as hosts. This DP provides guidance on detection and identification of these three along with information on four species related to C. nenuphar from the same region in North America, but not associated with stone fruits, in order to enable their differentiation.

Sharka (plum pox) disease, caused by Plum pox virus (PPV), is one of the most serious viral diseases of stone fruit and affects plants of the genus Prunus. It has first been reported in Bulgaria in 1917-1918, spreading progressively to a large part of Europe, the Mediterranean basin and the Near East and has been found with a restricted distribution in South and North America and Asia. Sharka disease reduces quality of the stone fruit and causes early fruit drop and its management costs worldwide since the 1970s exceed 10 billion Euros.

PPV is a member of the genus Potyvirus in the family Potyviridae. It is transmitted in the field by aphids and spreads over long distances through movement of infected propagative material. PPV isolates can be classified into different strains, which vary in their symptomatology, pathogenicity, host range, epidemiology and aphid transmissibility.

The DP2: PPV describes detection and identification of PPV using serological and molecular methods and was first adopted in 2012. In order to reflect advances in our knowledge of PPV and new methodologies that have become available, this DP was revised to indicate new strains of PPV that have recently been described and to include a method for specific identification of these new strains.

Read more about the work on DPs and the TPDP at https://www.ippc.int/en/core-activities/standards-setting/expert-drafting-groups/technical-panels/technical-panel-diagnostic-protocols/.

The newly adopted DPs will soon be available at the Adopted Standards (ISPMs) webpage at: https://www.ippc.int/en/core-activities/standards-setting/ispms/.