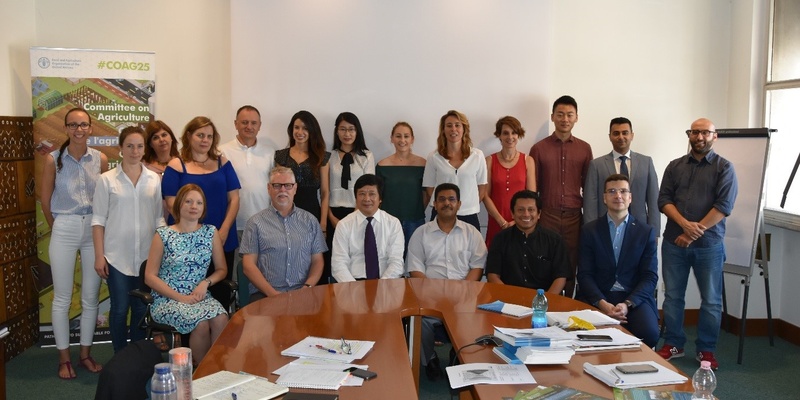 The 2017 Mid-Year meeting of the IPPC Secretariat was held on 14 July 2017 at the FAO Headquarters in Rome. The objectives of the meeting were presenting the achievements of the first semester and plans for the second semester of 2017, while also conducting a team work exercise.

The meeting was chaired by Jingyuan Xia, the IPPC Secretary, and attended by all Secretariat staff. Team Leaders Brent Larson (SSU lead), Orlando Sosa (IFU lead) and Dorota Buzon (IST officer in charge), made briefings for the respective teams, while Marko Benovic and Mirko Montuori presented on behalf of the Task Force for the Resource Mobilization (TFRM) and the Task Force on Communication and Advocacy (TFCA), respectively. Hechu Zhu also presented her work as an intern of the IPPC Secretariat for 2016-2017. Finally, The Secretary Xia made conclusion remarks by highlighting tem major achievements for the first semester and eight core activities for the second semester.

Major Achievements amongst the many others for 2017 first semester were listed as follows:

1) The IPPC annual theme on Plant Health and Trade Facilitation was disseminated during the CPM 12 in Incheon, Republic of Korea, by organizing a series of activities such as a key-note address, a special session on e-commerce, and one side event on e-Phyto.

2) The major governance activities were organized, including the CPM-12, two FC and two Bureau meetings, one Standards Committee and one Capacity Development Committee; selecting members of the new oversight body for implementation; and promoting the development of the IPPC strategic framework for 2020-2030.

3) A record number of standards were progressed and adopted, with 15 standards adopted, 10 Diagnostic Protocols noted, and 7 standards sent for consultation.

5) The e-Phyto pilot project was implemented, including meetings of the e-Phyto Steering Group, and of the e-Phyto Industry Advisory Group, the finalization of requirements for developing the hub and generic e-Phyto national system (GeNS), and the development of legal standards for countries to exchange information through the hub.

6) The communication and advocacy were enhanced, with the release of new NRO guidance in three languages, issue of 68 headline news, publication of 800 copies of 2016 IPPC Annual Report, and issue of 3 IPPC factsheets.

7) The initiative of IYPH 2020 was promoted, with the organization of the second meeting of the IYPH steering committee, the reception on promoting IYPH 2020 at FAO HQs, and the IYPH resolution adopted by the 40th Session of the FAO Conference.

8) International cooperation was enhanced, including cooperation with IAEA on standard setting, with WCO on e-Phyto, and with CBD on biodiversity-related issues.

10) The internal management stressed through regrouping of the Secretariat staff, standardization of ten items on communication and advocacy issues, and celebration of the IPPC 65th anniversary.

Core activities among many others for 2017 second semester included: a) Continuous implementation of the IPPC annual theme for 2017; b) Support to IPPC governance activities; c) Prioritization of standard setting; d) Strengthening of standards implementation; e) Promotion of communication and advocacy; f) Deepening of IPPC network and international cooperation; g) Strengthening of resource mobilization; and h) Improvement of internal operational mechanism.