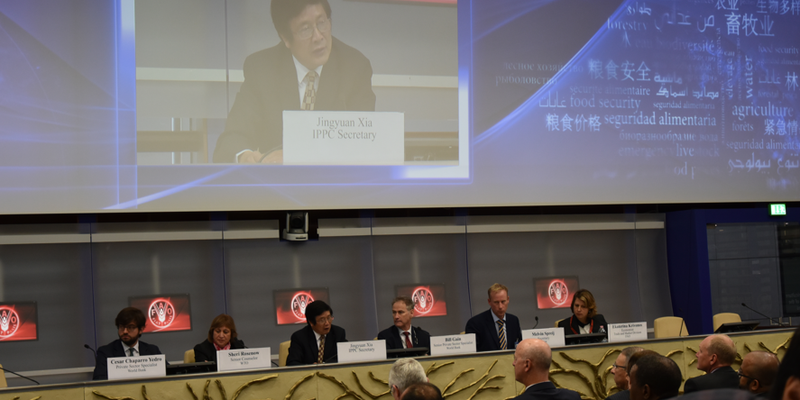 The IPPC Seminar on Plant Health and Trade Facilitation - the seventh in a series - took place at the FAO Headquarters, Rome, Italy on October 10th 2017. The seminar was chaired by IPPC Secretary Jingyuan Xia, and attended by over 100 participants, including participants of IPPC SPG meeting, permanent representatives to FAO and FAO staff. The seminar brought together representatives from the World Trade Organization (WTO), the Standards and Trade Development Facility (STDF), the World Bank and the FAO Trade and Markets Division.

Bill Gain, Global Lead of the Trade Facilitation and Border Management Unity of the World Bank presented on recent lessons on trade facilitation and plant health. He detailed current changes facing borders, key aspects of a modern border management approach, the concept of the single window system and conditions enabling it, as well as the implementation lessons learnt. He emphasized the need for a coordinated border management approach to address common challenges and outlined the benefits for each border and trade facilitation stakeholder.

Cesar Chaparro Yedro, the World Bank Group s Coordinator for Enabling the Business of Agriculture , described the background of the programme, its country coverage, thematic coverage, and the methodology used by the programme. In its current stage, the programme has finalized data collection for 62 countries and is now analyzing policies, and refining its methodology. Some findings from the programme were detailed, including data indicating that it is cheaper and faster to obtain a phytosanitary certificate in countries that have electronic processes in place and that can conduct inspections and issue certificates on-site.

Ekaterina Krivonos, Economist of the FAO Markets and Trade Division presented on major links between phytosanitary controls and agricultural trade, and detailed examples of SPS measures with high economic impact, and the FAO s capacity development work to support the effective application of trade rules. She also emphasized the importance of in-house collaboration to strengthen countries abilities to benefit from agricultural trade while safeguarding plant health.