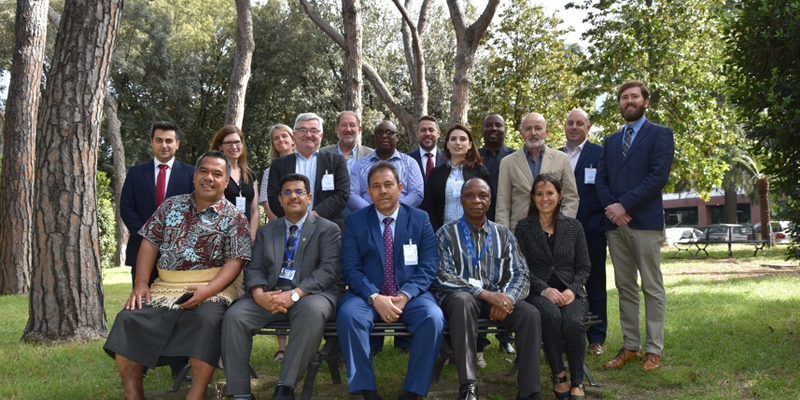 From 23 to 25 April 2018 the International Year of Plant Health Steering Committee of the IPPC (IYPH StC) held its fourth meeting at FAO headquarters in Rome.

Led by Chairperson Ralf LOPIAN (Finland), and supported by the IPPC Secretariat, twenty participants and six invited stakeholders took part in the meeting.

Mr Shoki AL-DOBAI, Integration and Support Team Leader, welcomed participants on behalf of the IPPC Secretariat and recalled the good progress made towards the IYPH proclamation, which is planned be discussed by the United Nations General Assembly (UNGA) in October/November 2018. He also briefed on the decisions taken by the thirteenth session of the Commission on Phytosanitary Measures (CPM-13) in relation to IYPH. He informed that the CPM noted the report of the second and third IYPH StC meetings, including the revised communication work plan and potential partners for IYPH; agreed to the skeleton of IYPH programme events and their associated estimated costs; encouraged CPs to provide extra-budgetary contributions to enable promotional activities to support the IYPH proclamation process and subsequently the IYPH programme development; urged CPs to contact their competent authorities in charge of United Nations affaires to support the proposal for an IYPH in 2020 within the Second Committee of the United Nations General Assembly (October to November 2018); and requested CPs to share national and regional level activities relevant to IYPH with their regional representatives in the IYPH StC.

Ms Marcela VILLARREAL, Director of the Partnerships and South-South Cooperation Division at FAO, welcomed IYPH StC members on behalf of FAO and called upon participants to ensure strong support by their respective UN Missions. She welcomed ongoing IYPH preparations as one of the most advanced ones since she had started dealing with international years. Ms VILLARREAL also informed that soon after the planned proclamation by the UNGA, transition arrangements will be made for the new IYPH Steering Committee, which will be constituted officially in early 2019, suggesting that one option is that the current IYPH StC is maintained in the form of technical advisory committee.

Ms Clara VELEZ FRAGA, Director of the FAO Office for Corporate Communication, Outreach and Promotion Branch (OCCO), also welcomed participants and recalled that early preparation is essential, and that the work plan being developed by the current IYPH StC is very appropriate. She suggested to establish a group of communication focal points from different regions/organizations, tasked to create a visual image to ensure that communication is really common across all materials and initiative. She confirmed that OCCO would be the focal point office for the year s communication (communication strategy including media, social media, brand identity). Ms VELEZ FRAGA also advised that IYPH is a great opportunity not only to promote plant health, but also the IPPC implementation.

Among the highlights of the meeting: the decision by the IYPH StC to develop an IYPH information package in cooperation with the IPPC Secretariat and FAO; the organization of a reception by the Finnish Mission in New York to support the IYPH proclamation; the inclusion of the International Seed Federation as an official member of the IYPH StC; a stakeholder analysis conducted in conjunction with the development of expected outcomes and outputs; the further development of the IYPH work programme; the request to the IPPC Secretariat to conduct an analysis of staff needs to support the IYPH programme development.

The report of the meeting will soon be available at the following link: https://www.ippc.int/en/iyph/