Controlling a Desert Locust upsurge and its threat to food security 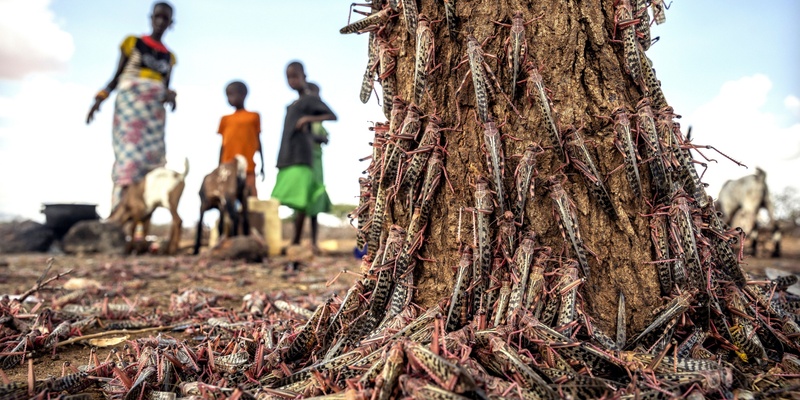 Rome, 1 April 2021. Desert Locust (Schistocerca gregraria) is considered the most destructive migratory pest in the world. For its ability to migrate over large distances and rapidly increase its numbers, the Desert Locust poses a potential threat to plant health, agriculture and the livelihood of one-tenth of the world’s population. A single square kilometre of swarm can contain up to 80 million adults with the capacity to consume the same amount of food in one day as 35,000 people. The pest can also multiply 20-fold with each new generation every three months and during plagues can cover an area large as 20 percent of Earth’s land surface.

Since early 2020, East Africa has been facing the worst Desert Locust upsurge in over 70 years. Starting in 2018, unusual weather such as rains, cyclones and floods allowed widespread breeding of the pest in East Africa, Southwest Asia and the Arabian Peninsula. In particular, Ethiopia, Somalia and Kenya have been the countries most affected. FAO has been working with affected countries to undertake continuous surveillance, ground and aerial control operations, impact assessments, and environment, health and safety actions in order to curb the spread of the pest worldwide.

Since the establishment of FAO’s global Desert Locust Control Committee in 1955, the Organization has assumed a global role in coordinating Desert Locust management. Its Desert Locust Information Service has been providing early warning and forecasts to affected countries and partners for seven decades. FAO’s three regional Desert Locust commissions strengthen national capacities in 30 countries affected by the pest from West Africa to Southwest Asia. “FAO together with affected countries have adopted a preventive locust control strategy to effectively address locust issues in a sustainable manner”, said Mr Shoki Al-Dobai, Senior Agricultural Officer at the FAO Plant Protection and Production Division, during the closing session of the 15th Commission on Phytosanitary Measures (CPM-15). “This strategy consists of permanent monitoring of locust populations in their primary habitats to allow timely early warning and early reaction with well-targeted control operations”, he explained.

Desert Locust prevention is the primary pillar of the FAO’s Global Desert Locust Response Plan for limiting the spread of the pest to new areas. The regional commissions work on the implementation of the preventive control strategy by promoting the establishment of autonomous national Desert Locust units and strengthening national capacities of their member countries in survey and early warning, reporting, preventive control, training, contingency planning as well as human and environmental safety standards, explained Mr Al-Dobai at CPM-15.

“Imagine that about 70 years ago, the early warning system consisted of surveys by camel and data transmission by post. We have certainly come a long way and I am very pleased to share these exciting developments with you today”, stressed Mr Al-Dobai. Innovative solutions and technologies, such as long-distance drones, real-time field data, GPS, digital tools, dashboards and platforms, are now being used for monitoring, mapping, recording, forecasting and reporting on the global Desert Locust situation. Recent surveys in the field show that locust infestations are steadily declining in East Africa due to ongoing control operations and the absence of rains and further breeding. As no significant rains are forecasted in the coming weeks, this trend is expected to continue, which could lead to the collapse of the 2019-2021 upsurge.

For more information, read the presentation on Desert Locust upsurge and FAO response.