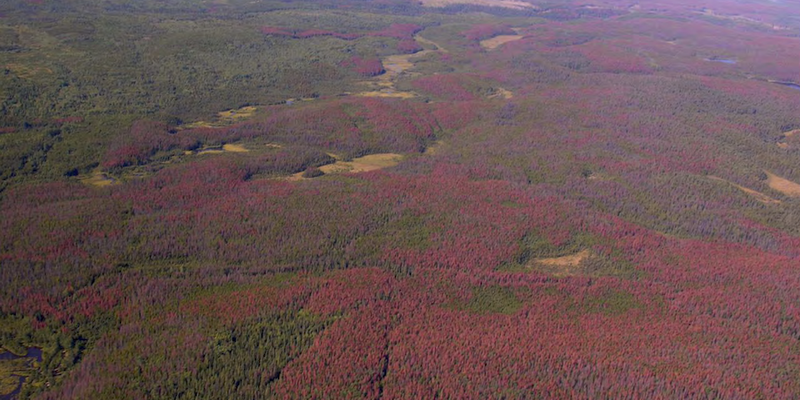 Mountain pine beetle (Dendroctonus ponderosae) has destroyed about 16 million ha of forests and 675 million cubic metres of timber in British Columbia and east of the Rockies in Alberta. With care, timber can be treated to eliminate pests, permitting safe export. Photo credit: Canadian Forest Service.

As the world gears up to mark the 3rd annual International Day of Forests tomorrow (21 March), it is worth remembering that in order to deliver the many benefits being celebrated, forests need to be healthy.

The theme of International Day of Forests this year is Forests | Climate | Change, to highlight the ways in which forests and climate change are linked and to rally global support for greater action and change. One of the ironies of forests and climate change, however, is that while forests can contribute to climate change mitigation, the very fact of climate change enables some pests to thrive in areas where they could not before and in doing so to threaten forests. The International Plant Protection Convention (IPPC) enables countries to keep pests at bay while at same time enabling global trade.

Emerald ash borer (Agrilus planipennis), native to Asia and eastern Russia, is just one of many pests that threatens forests when it moves to a new area. It has already killed millions of trees in Canada and the United States of America, where the costs of control are estimated at USD1 billion per year for the next 10 years. In Russia, most of the ash trees within 100 km of Moscow are dead, and Europe s ashes are at risk.

Pests respect no international boundaries, and move west to east as readily as east to west. The pinewood nematode (Bursaphelenchus xylophilus) is native to North America but now kills millions of trees each year in China, Japan and the Republic of Korea. It has recently been found in Portugal.

Emerald ash borer and pinewood nematode almost certainly invaded new areas by hitching a ride in packing materials made of wood, such as pallets and crates. For years these materials - essential components of global trade - were barely considered a threat. However, as a result of pest outbreaks that threatened forests worldwide, their role has been recognized. ISPM15 - Regulation of wood packaging material in international trade - is a globally-recognized standard that has been adopted by the IPPC to respond to the threat. It describes phytosanitary measures that reduce the risks associated with pests moving around on wood packaging material, while many other IPPC documents offer additional guidance related specifically to protecting forests. 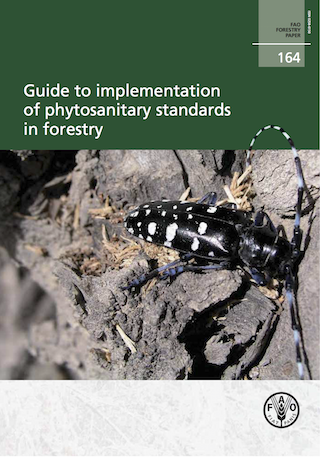 With the help of IPPC Secretariat members the Forestry Department of FAO produced a booklet called Guide to implementation of phytosanitary standards in forestry to show how all stakeholders need to understand and implement the ISPMs in order to maintain the health and vitality of forests.

There is also a training course based on the book and both are available online. Inevitably, preventing a pest outbreak is both more effective and less costly than controlling it after the fact, and these resources contribute to preventative efforts.

There is a role for ordinary citizens too. Moving firewood from one place to another can spread pests. If possible, always source firewood as locally as possible.

The Commission on Phytosanitary Measures, IPPC s governing body, is meeting in Rome this week. The 181 member countries strongly support global efforts to constrain the spread of all pests, including those that threaten forests. With such vigilance, the future of forests to celebrate on future International Days of Forests is better assured.