Andean government representatives discussed on 7-8 March 2018 in Quito, Ecuador the challenges they face and the successes they celebrate in setting international standards used in trading plant products and food internationally. Contact points, representing members of the Codex Alimentarius and parties to the International Plant Protection Convention (IPPC), shared their experiences while seeking ways to boost subregional cooperation during a workshop, convened by the Secretariats of the two UN organizations and Corporación IG-DE.

Over the course of two days, standards experts from Bolivia, Chile, Colombia, Ecuador and Peru, engaged with representatives of the Andean Parliament, Andean Community and Food and Agriculture Organization (FAO) as well as local producers to discuss jointly promoting and strengthening productive and value chains. Policy makers, experts, producers and exporters became more acquainted with the Codex and IPPC standard setting and implementation process.

During the opening ceremony, attended by five ministers and two deputy ministers, Andean Parliament President Fernando Meza said: There is no other way than unity in production, in exportation, in food security so that the whole world knows that the south also exists.

Calling for Andean countries to act as one, he spoke about rationale behind the Normative Framework for the Promotion of Productive and Value Chains, which was approved by the Andean Parliament in October 2017 to promote regional integration through measures and policies that encourage competitiveness, economic integration and development, complementarity and production diversification.

Also speaking during the opening ceremony, Ecuador s Minister for Health, Verónica Espinosa, spoke about food as a central part of health, noting that how we feed ourselves corresponds to how we evolve. She said: Today food is one of the most important determinants in public health.

The economic importance that the food trade holds was also highlighted during the opening. The Minister for Industries and Productivity of Ecuador, Eva García Fabre, said: We are engaged in making production and value chains facilitating trade and improving food security.

The Policy Convergence and Standards Implementation in the Andean Sub-region Workshop saw the active participation of standards experts, who zeroed in common challenges. For instance, they spoke of the difficulties in coordinating efforts across the various offices (often in as many as six ministries) involved in setting the standards or how to better involve all relevant parties, including the private sector, in implementing them. A number of the experts noted that the adoption of standards in national legislation often makes their implementation more successful. Other successes mentioned were, in the case of IPPC, pest eradication or the use of ePhyto (electronic certification).

Mirko Montuori, representative of the IPPC and Codex Secretariats, recalled the importance to involve all actors in the production and value chain in the application of the SPS agreement and particularly international standards.

The meeting concluded that the implementation of Codex and IPPC standards, vehicles to support the Normative Framework recently approved by the Andean Parliament, is an opportunity to achieve greater food security, ensure human and plant health and protect the environment. In essence, advancing the Sustainable Development Objectives (SDG) through coordinated action at sub-regional level. 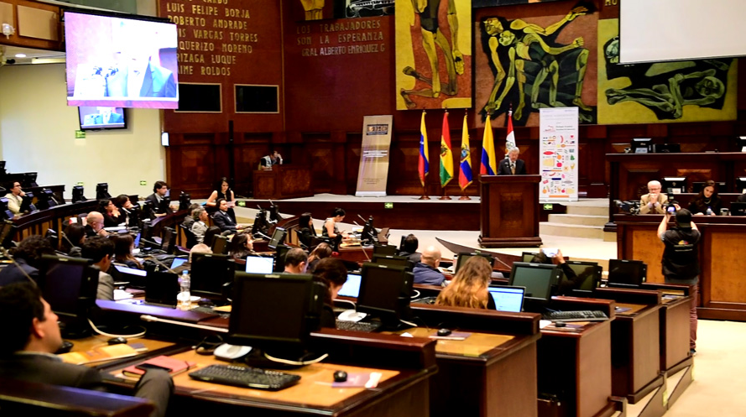 Recording of the opening ceremony

News by Ministry of Health of Ecuador

News by Ministry of Defense of Ecuador

News by Municipality of Guayaquil