The Beyond Compliance project holds final meeting in Bangkok 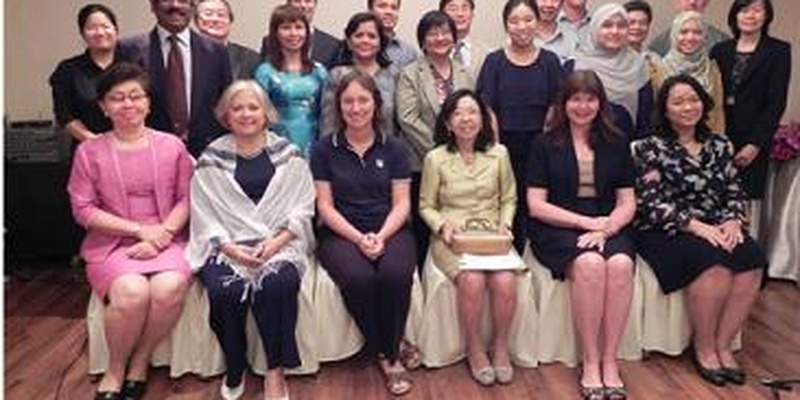 Participants at the official opening of the Final Meeting. Dr. Mantana Milne is seated third from the left

The final meeting of the STDF-funded project, Beyond Compliance: Integrated systems approach for pest risks management in Southeast Asia (STDF/PG/328) was held at the Maruay Garden Hotel, Bangkok, Thailand, from 29th July to 2nd August 2013. The project was officially launched by Dr. Manthana Milne, the Deputy Director General, Department of Agriculture, Ministry of Agriculture and Cooperatives, Thailand. In her speech, Dr. Manthana opined that the outputs of the project, with focus on the systems approach, will greatly contribute to a nexus of innovative knowledge in other agricultural commodities. It will also open new vistas that include the participatory approach in decision making i.e. between the NPPO and the stakeholders. She noted, however, that in the present competitive world, increasing trade is the rule of the day and therefore critical that the project outputs could increase confidence and competence in trade negotiations and provide opportunities for new trade pathways.

The objectives of the meeting were to: (i) provide an overview on project progress and outputs from work packages (e.g. tools, reports; administration/finance) in alignment with log-frame deliverables and a project work plan; (ii) evaluate the progress with country and regional case studies; assess technical and other issues; (iii) assess moving beyond Beyond Compliance (BC) viz., build-ups (e.g. market access best practices; contribution of BC e.g. negotiations; building confidence and competence); (iv) determine modalities for dissemination of project outputs (e.g. publications; presentations at key meetings) and (v) ascertain the next steps for the project such as impact evaluation, institutional embedding, and expanding stakeholder participation.

The program consisted of the following: (i) oral and poster presentations from project members reviewing the project''s progress and issues regarding the various work packages such as country and regional case studies; (ii) presentations on related projects (e.g. FAO/IAEA control of fruitfly; AusAid-funded Beyond Compliance case study on Bowen tomatoes) and on special topics (e.g. market access best practices and contributions of BC; a regional decision support scheme for pest risk analysis in southeast Asia by Dr. Tarek Soliman of NUS); (iii) a training session conducted by QUT and ICL experts to review the Bayesian tools for external comment, and (iv) a half-day field trip to a commercial orchid farm to assess first-hand the various components of the production system and supply chain. This assessment included the fumigation treatment protocols by the farm which also serves as an orchid exporter. The field trip gave insights into the complexities of farm operations and that of implementing the SA, and recognized the needs for team work and additional information to formulate a pragmatic SA under farm conditions.

The project''s success was exemplified by the general positive feeling amongst the meeting participants. Countries involved in the project noted its achievements, specifically those regarding the project''s platform to improve market access and declared that they would be interested in extending the approach to other countries. Essentially, the potential for countries to adopt and adapt open options for trade in other countries, regions and commodities was recognized. The participants expressed a higher degree of confidence and competence in handling tools (DSS-BN) used in case studies while also noting specific complications that arose during this process. The discussion concluded that the Systems Approach (SA) should focus primarily on trade, and that the tools are only present to facilitate or offer support to this process.

A number of generic and specific conclusions were outlined during the meeting to be considered when reporting to STDF. Assessments using the Project Logical Framework and matched project outputs with expected results (e.g. decision tools for SA produced with the use of the tools becoming evident) and made a range of conclusions about team work needed for design and implementation of SA and the close cooperation between public and private sectors. The meeting also highlighted some recommendations to APPPC.

Market negotiation and other draft manuals were discussed and updates on future CDC plans were provided. In this context, an overview of the Market Access Guide was discussed with a sharing of experiences from other projects. With regards to dissemination of project outputs, the modalities for dissemination of project outputs were finalized which included the list of Frequently Asked Questions (FAQs).

Finally, participants discussed and agreed upon the deliverables, outputs, timelines, roles and responsibilities for the next 5 months (until December 2013).