Where some countries grow a handful of crops for export, Nepal grows thousands, with current capacity able to export only a few in limited quantities. Reaching from rich lowland plains to the roof of the world, the nation has the highest amount of biodiversity relative to its land coverage on the planet.

With the country intent on boosting its trade not just with neighboring nations but across Southeast Asia and the broader Asia-Pacific, it is vital that Nepal has the processes and tools in place that it needs to ensure that its exports can meet the import requirements of its trading partners. For plant products, that means meeting phytosanitary requirements.

In June 2021, Nepal began work on a Phytosanitary Capacity Evaluation (PCE), a process that will help strengthen the country's trade and transport infrastructure and better connect it with its trading partners. It is part of the World Bank-funded Nepal Strategic Road Connectivity and Trade Improvement Project (SRCTIP). The process has been led by the country’s national plant protection organization (NPPO) with funding from the World Bank, supported by the International Plant Protection Convention (IPPC) Secretariat and enabled by an independent facilitator.

After almost a year of virtual meetings held at the height of the global COVID-19 pandemic, the PCE was completed in March 2022 after a team from World Bank and the IPPC Secretariat travelled to Nepal to directly engage with the NPPO and industry stakeholders. 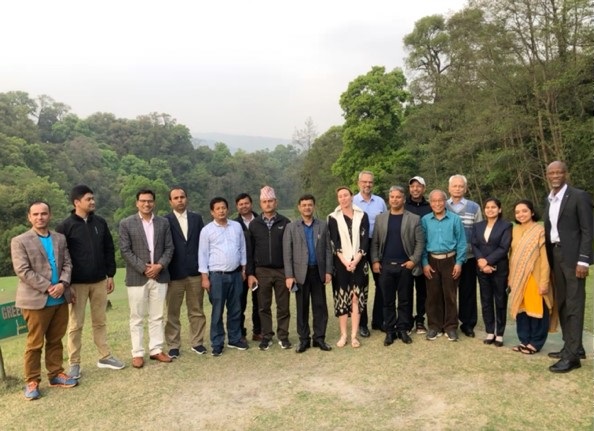 Under the previous Nepal-India Regional Trade and Transport Project, Nepal established the first central plant health lab and refurbished a number of other sanitary and phytosanitary (SPS) laboratories across the country, funded by the World Bank.

Before this, Nepal’s traders had been forced to rely on private laboratories to ensure their exports met trading partners’ accreditation requirements. Without access to many exports certification services, traders instead used Indian laboratories to obtain testing results. Even now, with the infrastructure in place, the NPPO still lacks human resources, making improved capacity building and technical training crucial.

By applying strategic management tools used in the PCE, 15 stakeholders across trade and agriculture reached consensus on how best to build the nation’s SPS capacity and infrastructure. Operationalizing the newly built central lab, improving the capability of the smaller support labs, establishing quarantine facilities and improving data collection and storage are all vital next steps that Nepal can take to directly help the nation’s local traders and producers.

Mahesh Chandra Acharya, Senior Plant Protection Officer at the Plant Quarantine and Pesticide Management Centre (PQPMC), and Nepal’s PCE Coordinator, said that the structured PCE process had been invaluable in helping them identify the issues that need attention to sustain existing markets and improve the nation’s trade prospects.

“This process led us to develop a real, grounded document which can be used by Nepal’s Ministry of Agriculture and the Ministry of Finance to work together to secure funding from donors such as the World Bank Group. It is also to guide ourselves to carry out more specific activities and priorities within our limited resources,” he said. “The PCE has brought light on our strengths and weaknesses. We’ve been able to visualize the opportunities that we have but have not yet been able to exploit.”

Along with crucial infrastructure improvements, the World Bank supported a full assessment of the nation’s SPS agencies to ensure that the institutions understood what tools are needed to play an active role in facilitating trade in plant and plant-based products.

Shane Sela, Senior Trade Facilitation Specialist at the World Bank, said that the comprehensive process had been essential not just in improving the quality and consistency of Nepal’s exports, but also in contributing to the nation’s food security.

“Trade has to be safe – for consumers, domestic producers and all Nepal’s trading partners,” he said. “It also has to be efficient. From that perspective, uplifting to meet the SPS agreement is really critical. The PCE allowed the agency to have clarity on what is needed and where to position investments for maximum trade and phytosanitary benefits.”
More directly, the PCE was aimed at improving Nepal’s trade facilitation by supporting the Ministry of Agriculture and Livestock Development in identifying the gaps and capacity weaknesses and recommending appropriate solutions. Based on the gap analysis conducted through the PCE and supported by field inspection findings, the NPPO decided that an existing aluminum phosphide fumigation facility may be reconfigured to address the methyl bromide need.

Acharya said that having an experienced and independent facilitator to guide them through the process had been an essential part of the PCE.

“[The facilitator] gave us the broader visualization – many times we were engaged in our internal discussions and debating among the stakeholders. The facilitator guided us and provided us with some options,” Acharya said. “We came to know that the world is much broader than we visualized.”

This is a series of success stories from four countries across the world that have carried out Phytosanitary Capacity Evaluations – even in the face of the global COVID-19 pandemic. In Saint Lucia, the evaluation identified ways to strengthen the Caribbean nation’s data collection and storage capacities. In Nepal, this structured process shone a light on opportunities for further investment in the human resources needed to operate the country’s diagnostic laboratories. In Nicaragua, it paved the way for essential new plant health legislation. And in Sri Lanka, the PCE identified a clear path forward for overcoming challenges within the country’s pest diagnostic capacity.