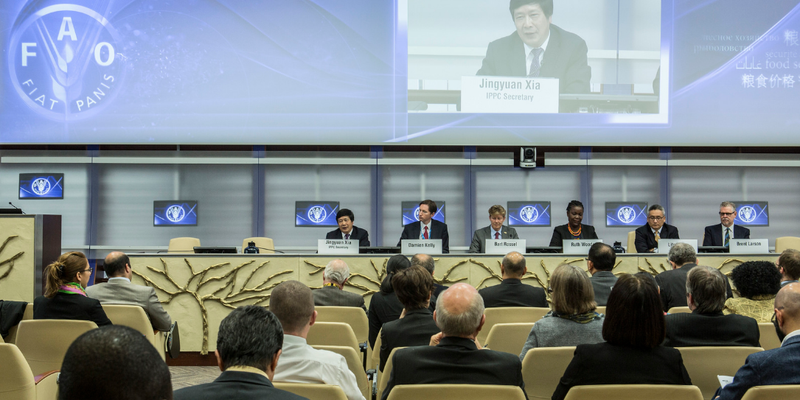 The 4th IPPC seminar on Plant Health Standards and Food Security, was held at FAO-HQ (Sheikh Zayed Centre) on 13 May 2016, which focused on how standards for plant health directly enhances food security globally. Over 100 participants attended the Seminar, including the permanent representatives of three Rome-based UN agencies, members and observers of the IPPC Standard Committee, as well as the IPPC and FAO staff.

Mr Jingyuan Xia, Secretary to the IPPC, chaired the Seminar, pointing out how the IPPC is the only international organization for plant health standards in the world and, as such, is a key instrument to promote plant health on a global scale. He also noted that there are five IPPC Themes for the next five years (2016-2020), and stressed that this seminar on Plant Health Standards and Food Security is one of a series of activities for communication and advocacy within the IPPC Theme on Plant Health and Food Security in 2016.

Mr Damien Kelly, First Secretary of the Embassy of Ireland to Italy, gave opening remarks. Citing the terrible famine caused by the potato blight which affected Ireland in the 1840s, Mr Kelly demonstrated the clear link between plant health and food security, and highlighted the need to prevent pest introductions in order to help avoid devastating economic and social consequences in the future. In addition, Mr Kelly re-stated Ireland s commitment to help champion the work of the IPPC and pointed out that Ireland had already contributed financially to support the International Year of Plant Health (IYPH) 2020. It is hoped that the IYPH will raise awareness on the need to protect the world s plant resources.

Mr Bart Rossel, Director, International Plant Health Program, Australia, demonstrated how IPPC standards enhance food security and directly support four of the UN s Sustainable Development Goals and two of FAO s Strategic Objective by providing several examples of the economic consequences of pests and their negative impact on food security. The on-going threat posed by wheat rust in Kenya stresses the need for phytosanitary measures to prevent that the pest spreading to neighbouring countries. He further demonstrated that as trade increases exponentially, it is essential for countries to harmonize their measures. He demonstrated that IPPC standards enhance food access by facilitating safe trade and enhance food availability by limiting the spread and introduction of devastating pests.

Ms Ruth Woode, Department Head, Agriculture, Nsawam Adoagyiri Municipal Assembly, Ghana, gave an African perspective on food security and the international movement of grain. While Ms Woode presented numerous challenges faced by African countries in their struggle to enhance food security, she called for urgent action for the development of an international standard to facilitate the trade in grain while preventing the introduction of harmful pests. Grain is a major staple crop and source of income for most African countries; but these countries are net-importers of grain and remain vulnerable to pest introductions. Ms Ruth provided an example of how food aid in the 70s introduced a pest that African countries are still fighting today.

Mr Lifeng Wu, Division Director, National Agro-Tech Extension and Service Centre, China, discussed China s approach to food security through the use of phytosanitary standards. He too underlined the need to develop standards that addresses the pest risks from international trade in major staple crops. Every year China s grain production suffers a loss of 2% of gross food production in China. By implementing IPPC standards pest introductions are limited, food security increased and the environment protected.

In conclusion, Mr Brent Larson, IPPC Standards Officer, highlighted how specific standards contribute to food security, including through facilitating access to export markets, ensuring imports are safe and providing guidance on surveillance, diagnosis or treatments. He also explained that, although the standard setting process is over seven years in length, it is also one of the most open, transparent and inclusive standard setting processes in the world. He concluded the seminar noting that IPPC standards help ensure a fair playing field through which the most vulnerable smallholder farmers have potential market access while having their crops protected from harmful pests.