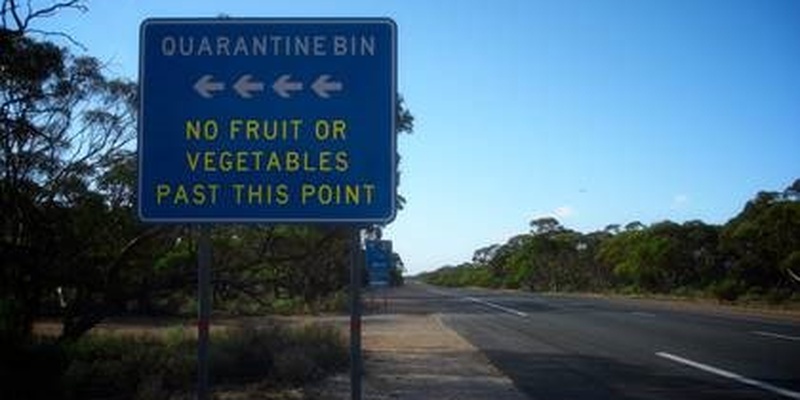 In Australia, Mediterranean fruit fly (Medfly) has a limited distribution in some parts of Western Australia. Its movement to the central and eastern states of Australia is inhibited by a hostile desert environment separating the west from the east. This forms a natural barrier which has supported the establishment of pest free areas for Medfly in central and Eastern Australia and the Ord River irrigation areas in northern Western Australia.

There is approximately 1500km of arid land separating the eastern states and territories and Western Australia across the Nullarbor Plain. There is considerable distances between urban townships in this region, typically in the order of hundreds of kilometres. Fruit fly dispersal distances are only short range and the long distances between urban centres severely limits the capacity of natural fruit fly populations to spread unaided. The limited distribution of Medfly in Australia has remained unchanged for almost 70 years.

The introduction of Medfly to the east coast from the west coast of Australia is only likely through human assisted movement, for example movement of fruit by the travelling public. To mitigate this, regulations are strictly enforced with road blocks and other punitive measures that prevent the movement of potentially contaminated fruit into the pest free areas. The Ceduna roadblock is located on the main route for both commercial transport and private travel between Western Australia and eastern Australia. The roadblock operates 24 hours a day and can stop and inspect all transiting vehicles. Commercial consignments in Australia are strictly regulated for fruit flies.

The Medfly area freedom status in Australia is maintained and verified through national management arrangements and agreed International Plant Protection Convention (IPPC) standards (ISPM No. 4: Requirements for the Establishment of Pest Free Areas (FAO 1996) and ISPM No. 26: Establishment of Pest Free Areas for Fruit Flies (Tephritidae) (FAO 2006)) to detect and identify Medfly, respond to outbreaks and declare when freedom has been restored. These pest free areas are maintained through the regulatory control of host material from infested areas and verified through absence records collected from Australia's national fruit fly trapping network as required under ISPM No. 6: Guidelines for Surveillance (FAO 1997). These measures have been effective at mitigating the impact of fruit flies to production areas and continue to facilitate domestic and international market access through recognition of pest freedom.

Australia recently emphasised these pest free areas at the World Trade Organization’s (WTO) meeting for the Agreement on the Application of Sanitary and Phytosanitary Measures (the SPS Agreement) held on 12 – 13 July 2017.

To highlight Australia’s commitment to the effective management of fruit fly, a video has been developed focussing on Australia’s Medfly freedom status and the established fruit fly pest free areas of Tasmania and the Riverland in South Australia.

The video demonstrates Australia’s nationally coordinated approach to effectively manage and control fruit fly, and the biosecurity systems in place. These include domestic controls and a national surveillance trapping network. The video highlights Australia’s investment and commitment to address the risks to production and trade posed by both Medfly and Queensland fruit fly.

The video was developed by the Australian Government Department of Agriculture and Water Resources together with the governments of Victoria, South Australia and Tasmania.

For further information you can send an email to Australia’s IPPC contact point at IPPC.contactpoint@agriculture.gov.au.