Significant achievements were obtained in communication, advocacy, and partnership of the IPPC Secretariat for 2017 through the efforts of the Integration and Support Team (IST) and the support of the Standards Setting Unit (SSU) and the Implementation Facilitation Unit (IFU), as well as the assistance of the Task Force for Communication and Advocacy (TFCA) and the Task Force for Resource Mobilization (TFRM). Among many others, the major achievements are highlighted as follows.

Excellent efforts were made to promote development of the International Year of Plant Health (IYPH) initiative, where the proclamation of the IYPH was endorsed at the 40th Session of FAO Conference. Two IYPH Steering Committee meetings were organized, and one reception on promotion of the IYPH was held at FAO HQs. One brochure and one video message on the IYPH were released.

Over 140 items of IPPC headline news were posted on the IPPC portal, with a 30% increase compared to 2016. The IPPC visibility was substantially increased through its active presence in the social media platforms with the steady growth of the followers of IPPC social media accounts (Facebook, Twitter, LinkedIn, Weibo). Two receptions were organized for celebrating the IPPC 65th anniversary at CPM-12 and during the SPG meeting in Rome, respectively. Advocacy materials were published, including the 2016 IPPC Annual Report, four IPPC factsheets (the IPPC in general, Xylella fastidiosa, ISPM 5, and Plant Health & Food Security), and one brochure on the ePhyto. A total of 8 videos were produced and are available on the new IPPC playlist on the FAO YouTube channel.

The efficiency of the Online Comment System (OCS) was improved by developing a new short guide, conducting several training sessions and handling over 1,000 requests for user support. The information management work was enhanced by developing the new Phytosanitary Facility Search Tool and the Online Registration System (ORS). 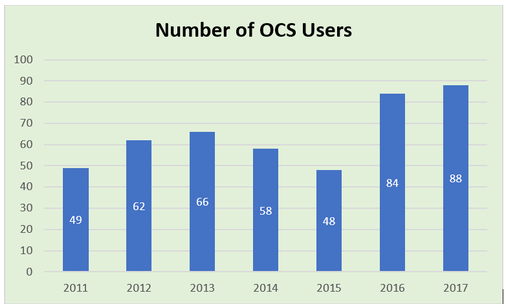